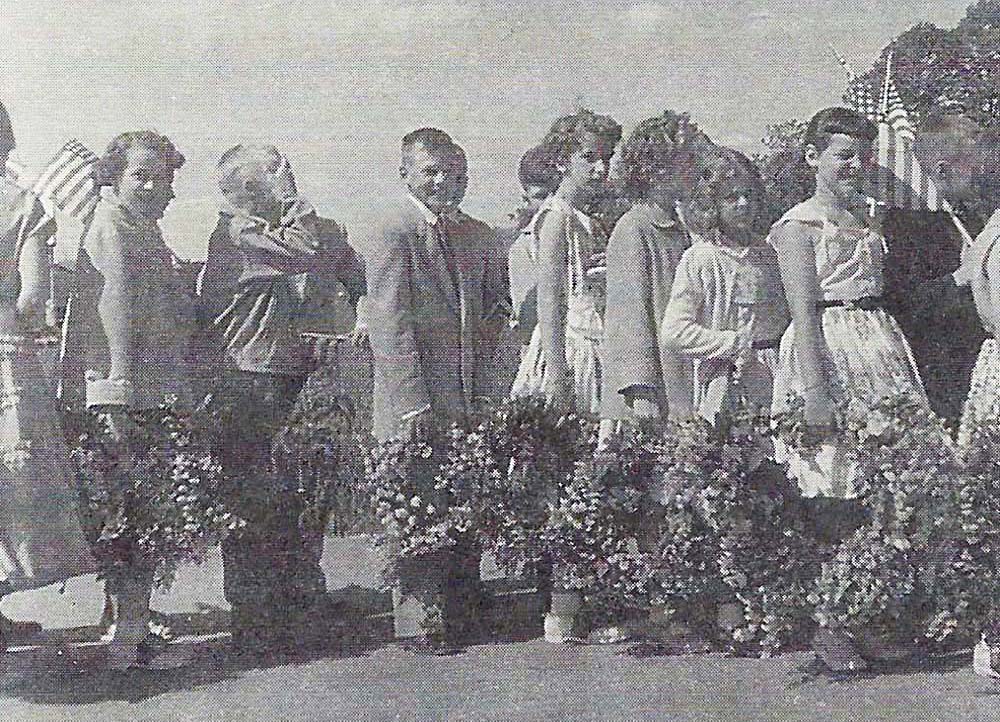 Children with flags and wreaths of spring flowers, lining up for the Memorial Day (Decoration Day) procession in 1955.

Melva Birkholz remembers Fillmore's Decoration Day in this excerpt from A Walk Down Memory Lane.

Next to Christmas, Decoration Day was the biggest event in Fillmore. We took seriously the day set aside to honor the veterans buried in our three cemeteries. There were the upper, lower, and old cemeteries. Although they had other names, no one ever used them. The teachers and children of our two-room school rehearsed for weeks in preparation for the parade and program. The Farmington Turner Society sponsored the ceremonies by providing money for the band and the use of Turner Hall.

Our village was astir early in the morning of the big day. Still wet with dew, papa cut tulips, lilacs, bleeding heart and other spring flowers and carried them into the cellar to rest in buckets of water until it was time to make a wreath for me to carry in the parade.

After breakfast, papa hitched our sleekly-groomed Buster to the wagon loaded with a lawn mower, pots of geraniums, and a sprinkling can with enough water to prime the pump. Then we were off to the cemetery to tidy up the family plots. Neighbors and friends were already there busily planting, mowing, or just visiting.

Shortly after noon, the children gathered on the school grounds. The girls came in white dresses over stiffly-starched petticoats, white shoes & stockings, and straw hats held in place by an elastic band tucked under the chin, each carrying a wreath of spring flowers. The boys showed up in knickers, fresh haircuts and smartly-polished shoes. Flags were passed out to the boys with instructions on how to carry them. 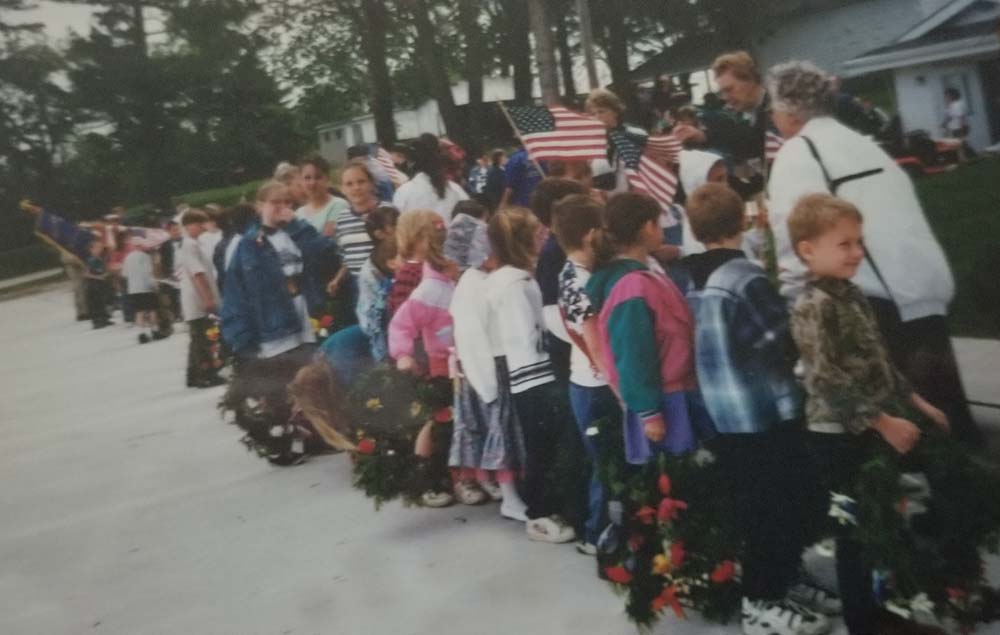 The Decoration Day procession and wreath tradition was revived for Fillmore's Sesquicentennial in 1997. Students from Farmington School and other children made wreaths and carried them to Union Cemetery.

The band assembled in the shade of the box elder trees as the teachers steered the children to their proper place in line. Civil War veterans came first. Most of them were very old, but determined to march one more time. Next came newly discharged World War I veterans. At the roll of the drums, we were off. No one ever led a parade more proudly and with more aplomb than Julius Geidel astride his prancing schimmel. What we children lacked in marching precision we made up for in enthusiasm as we kicked up the dust on the unpaved road that led to Turner Hall.

Sheltered by ancient pines, the hall was cool and shadowy as we made our way down the aisle to our seats. We all stood up to sing “America”. After the band played a few rousing marches that shook the rafters, it was time for the recitations. With pounding hearts, lest we forget our lines, we waited for our names to be called. “In Flanders Field”, “Barbara Frietchie”, and “The Blue and the Grey” were repeated year after year.

After the program, we marched down the hill to the cemeteries. Following a brief eulogy, a flag and a wreath were placed on each veteran's grave. When the Fillmore School closed in 1967, the parade and ceremonies were discontinued. Now Turner Hall stands empty and silent on Decoration Day. The flags fluttering on the graves of veterans are put there by members of the Turner Society without fanfare, without music, without a wreath of spring flowers.

I understand the Fillmore Decoration Day ceremonies as I knew them began shortly after the Civil War. I hope the community will revive this worthy tradition.

Excerpt from A Walk Down Memory Lane – A documented oral history – Town of Farmington – 1996.

Note: This popular Town tradition was re-created on Memorial Day in 1997 to mark the Town of Farmington's 150th anniversary. As part of the sesquicentennial celebration, students from Farmington School and other children made wreaths and carried them in a parade to Fillmore Union Cemetery and placed them on the graves of veterans. Since 1997, Farmington Historical Society has sponsored an annual Memorial Day program of remembrance and wreath-laying ceremony at Turner Hall and Union Cemetery.